Internet Explorer is not supported

The third negotiation session of the Post-2020 Global Biodiversity Framework took place from 14 to 29 March in Geneva, Switzerland. As an official observer of the UN Convention of Biological Diversity (CBD), a delegation of the Finance for Biodiversity Foundation participated in the official meetings and side events, based on the position paper we created in the working group Public Policy Advocacy.

Representatives from two financial institutions made up our delegation, co-chair and a member of our Public Policy Advocacy working group, Sonya Likhtman (Federated Hermes Limited) and Suresh Weerasinghe (Aviva) were in Geneva in the first week.

During the Geneva UN Biodiversity Meetings from 14 to 29 March 2022, David Ainsworth of the Convention on Biological Diversity interviewed Sonya Likhtman (Federated Hermes Limited), on behalf of Finance for Biodiversity Foudation, advocating for the inclusion of the financial sector in the GBF. #ForNature.

There was consensus from governments on the need to adopt a clear and simple mission to “halt and reverse biodiversity loss by 2030” and a recognition that the private financial sector must be recognized in the new Nature Deal, the Global Biodiversity Framework.

The CBD secretariat announced an extra negotiation meeting of the Open-Ended Working Group between 21-26 of June in Nairobi before the COP15 will take place in August/September in Kunming, China.

Statement during the opening ceremony

During the opening ceremony plenary session, the Finance for Biodiversity Foundation, together with Business for Nature, made a formal statement, calling for an ambitious Global Biodiversity Framework and summarising the following priorities:

Negotiations on the GBF

After two weeks of negotiations, there has been a little progress for the Global Biodiversity Framework (GBF). Most goals and targets of the GBF have been discussed to identify divergent views. We focused on Goal D and Target 14 in the meetings, because these refer to financial flows.

Sonya Likhtman did an intervention in the official Open-Ended Working Group meeting on behalf of the Finance for Biodiversity Foundation and based on our suggestions in our position paper on Goal D, asking to align private as well as public financial flows with the goals and targets of the GBF, reducing harmful biodiversity practices and increasing resources. This proposal was supported. The new Goal D text is published on the CBD website.

In the discussed and after updated target 14, we encourage that ‘private’ are included next to public financial flows. There is a new word included we did not like – ‘progressively’ aligning financial flows. We would like to see this word removed because we think it weakens the target.

So far, we’ve had several bilateral meetings and/or contact with twelve countries. We distributed our position paper and discussed our ideas for two key priorities, namely on Goal D and Target 14, and had an open discussion with negotiators to hear their views, opinions and concerns. We received general support on the level of private finance engagement and our progressive proposals to align private financial flows with the goals and targets of the GBF, and reducing harmful biodiversity finance and increasing resources. There was some interest in discussing further what the implementation for an enabling environment for the finance sector would look like. We are going to follow up on this in the working group Public Policy Advocacy of the Finance for Biodiversity Foundation.

Breakfast meeting and participation in side events 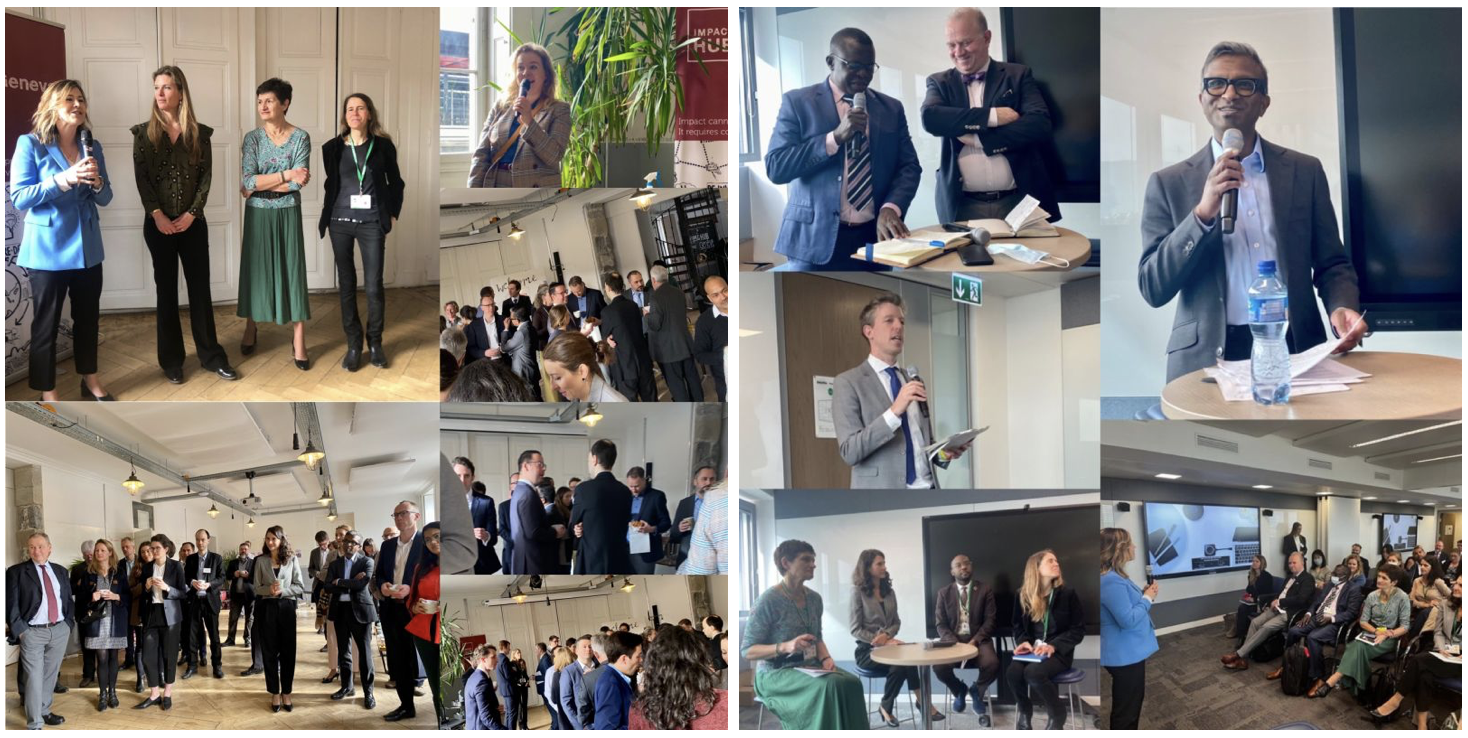 Together with UNEP FI, French Development Bank AFD and the Swiss government, we organized a networking breakfast event for finance and biodiversity professionals. It was a big success with around 50 people gathered to meet each other. This included interaction between private financial institutions, key public institutions, NGOs, and consultants. The organizers, including Anita from the Finance for Biodiversity Foundation, gave a short pitch on the position paper and introduced the delegation.

The Finance for Biodiversity Foundation organized, together with UNEP FI, French Development Bank AFD and the Swiss government, a side event on aligning financial flows. We had a debate on the alignment of financial flows with global biodiversity goals, in order to consider how the GBF can be a platform both for government action and for financial market actors to generate more resources for nature. Suresh Weerasinghe (Aviva) gave a keynote speech on our position paper and talked about ideas on aligning public and private financial flows with the GBF.

Afterwards, there was a panel debate with Sonya Likhtman (Federated Hermes Limited), Odile Conchou (AFD), Lucretia Landmann (Swiss government) and Stanislas Stephen Mouba (government of Gabon) on the idea that the alignment of financial flows is central to resource mobilization and the mainstreaming of biodiversity in the economic sectors. The panel also discussed concrete examples.

At the end, we had the honour of hearing the reflections of both co-chairs of the Open-Ended Working Group of the CBD, Basile van Havre and Francis Ogwal.

Saturday 19 March – Side event of Interdialogue Finance and Biodiversity (IDFB)

Sonya Likhtman participated in a side event as the only financial institution together with key countries to discuss the possibilities to align financial flows and ideas for implementation.